Email ThisBlogThis!Share to TwitterShare to FacebookShare to Pinterest
Labels: Wordless

Happy Wednesday Everyone!  I hope you all are having a super week.  I have officially survived the first build cycle of IM USA training.  Here is what I have been up to over the past couple weeks.

During my first week of training, I logged a total of 74 miles.  I completed 3 crossfit workouts, 1 swim workout, 2 bike rides (1 midweek and 1 weekend), and 1 half marathon.  This isn't super impressive, but it certainly is a start.

How did my half marathon go?? It went pretty well.  Would I say that I redeemed myself for last year's awful performance? Not quite, but it was an improvement for sure.  Just to jog your memory, at last year's Rock N Roll USA 13.1, I did everything you do not want to do when racing.  I did not train.  I decided to go out WAY too fast. I did not know the course.  The list goes on and on.  Even though I did not do as well as I hoped I would do, I still PRed.  I guess I cannot be too upset about that. Below are my splits. 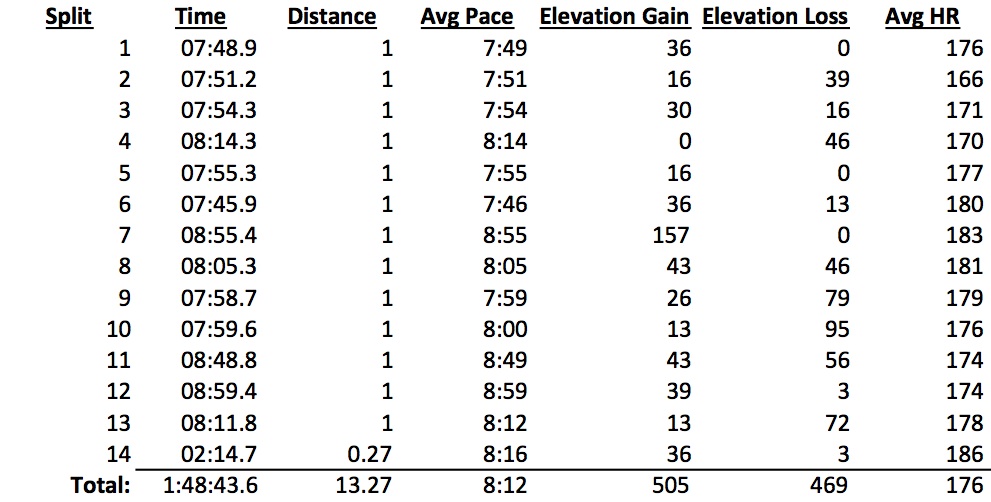 Takeaways from the 2013 Rock N Roll USA 13.1: I need to work on racing a steady and consistent race.  Half marathons are no joke.  They are short enough to be fast, but long enough to hurt. Let's hope that I have a better race at the Nike Women's Half in a month.

Week #1 wasn't all about training though.  I did manage to squeeze in a little St. Patty's Day fun by going to Shamrock Fest. :)


Week #2 was pretty similar to my first week with a little more mileage.  I logged a total of 84 miles.  HOWEVER, I did make it to both swim practices!

I completed 3 crossfit workouts, 2 swim workouts, 2 bike rides (1 midweek and 1 weekend) and 1 running workout.  Making it to both swim practices was awesome, but I must say that the big win of the week was that I actually enjoyed cycling.  Shocking, right?  I recently purchased the ISM Adamo saddle, and cycling is a 1,000 times better. Who knew that cycling could actually be fun? :)

Like the first week, I was able to squeeze in a little fun between workouts.  On Thursday night, I went to see Flip Orley at the DC Improv.  For those who haven't seen him, he puts on an awesome show!  I volunteered to be hypnotized the first time I saw him, so it was cool to see the show from the audience.  He certainly didn't disappoint.  Week #2 ended with more fun! I brought this flashy ride home with me.

Training goals going forward:  I need to focus on making time for my short midweek runs.  From looking at my workout log, this is where I tend to slack.  I also want to focus on getting my tush to both swim workouts.  I start to get worn down by the end of the week, and have a tendency to turn my alarm off on Thursday mornings. I also want to try to focus on maintaining some sort of balance during my build weeks.  Balance will be the key to me keeping myself sane during all of the training- especially when it comes to IMFL.

Happy Hump Day!  I hope everyone is having a super week.  My week has been a little crazy, but that seems to be the norm when I have a short work week.

Posted by Whitney at 2:27 PM No comments:

Morning, everyone!  Yesterday was the start of the Lent, and in true triathlete fashion, I have mixed in a little triathlon with my normal lenten penance. Here is what I plan to focus on during the 6 weeks before Easter.

Oh and on a completely unrelated note- Happy Valentine's Day!  Sending lots of hugs and warm and loving thoughts to everyone. <3 <3

Posted by Whitney at 8:37 AM No comments:

Happy Hump Day!  I hope everyone is having a super week.  I know I haven't been blogging that much; however, I am hoping that will change as my IM USA training is starting to ramp up and I will have lots of tri adventures to share. This year I have decided to add some additional strength training to my usual swim- bike- run routine.  During 2011, I did bootcamps sometimes twice a week.  I know, I should have been more consistent with the bootcamps, but some days I just wanted to be able to "sleep in" (7am).

Times are changing though! :)  This year I am adding something new and oh so wonderful to the mix- CROSSFIT.  I have heard a lot about CrossFit in the past, but it took me almost 6 months to finally drink the CrossFit Kool-Aid.  With the level of training IM requires, I will only be doing CF 2 times a week.  Lord knows, that I do not want to wear myself out to the point where I cannot do my normal workouts.  My plan is to replace my regular strength workouts with CF until it is time to taper for Lake Placid.

How is it going?  Well, I am five CF workouts in, and I am absolutely loving it.  I am feeling super strong, and the variation of the workouts is a nice break in my swim-bike-run routine. I will keep you posted on my progress.


What are you doing this year that is new and wonderful??

Email ThisBlogThis!Share to TwitterShare to FacebookShare to Pinterest
Labels: CrossFit

Happy Almost Friday!! I hope everyone has had a super week so far. Mine has been really busy, but enjoyable for the most part. :)

Posted by Whitney at 1:02 PM No comments:

Happy Friday!!  I hope everyone has a super weekend! :)
Posted by Whitney at 4:02 PM No comments:

Whitney
I'm Whitney, aka the Muffin, aka WereWhit. I am a runner, a daughter, a friend, a swimmer, a sister, an accountant, a cyclist and an IRONGIRL